The Overstay is something a bit different in the Bangkok alternative nightlife and hostel scene. Check out the great (and not so great) things that people have to say about us in the links below. 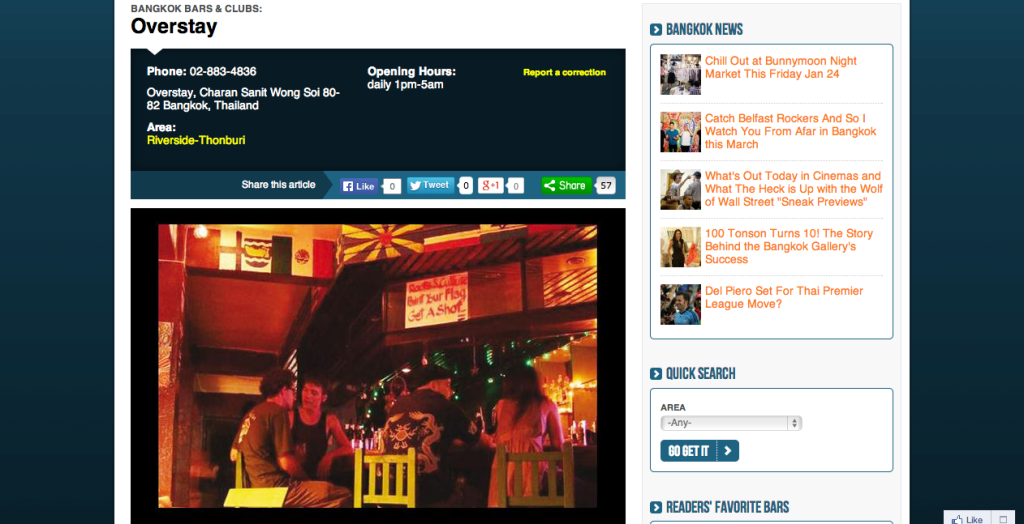 BK Magazine: “Pleasures that were thought to be completely lost have been unearthed and restored at the Overstay in Pinklao. This bar-cum-collective has, in its few short months, amassed a small but faithful flock, lovers of the subtle joys, conversationalists, jugglers and players of Scrabble. While this may sound like a good place to peacefully retire and see out the autumn years, those of frail hip and sternum are warned to stay away between the hours of midnight and dawn, or risk injury from the wild convulsions for which the bar’s dance floor is notorious.” 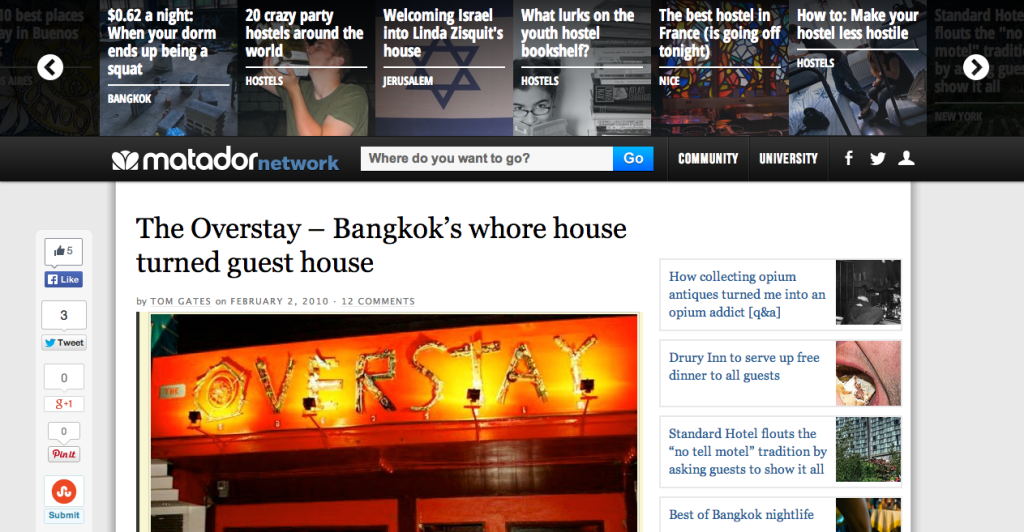 Matodor Nights: “The Overstay is close to a squat because it san old abandoned whore house. We are renovating it but 25 years does leave scars in a place. I think more than looking like a squat it’s a different place because we try to make a community of people. It’s a meeting zone. We know the name of the people staying, we organise dinner together once in a while (money for the food in on donation basis), or make some cultural events. Not long ago we acted out on one of the guest’s play.” 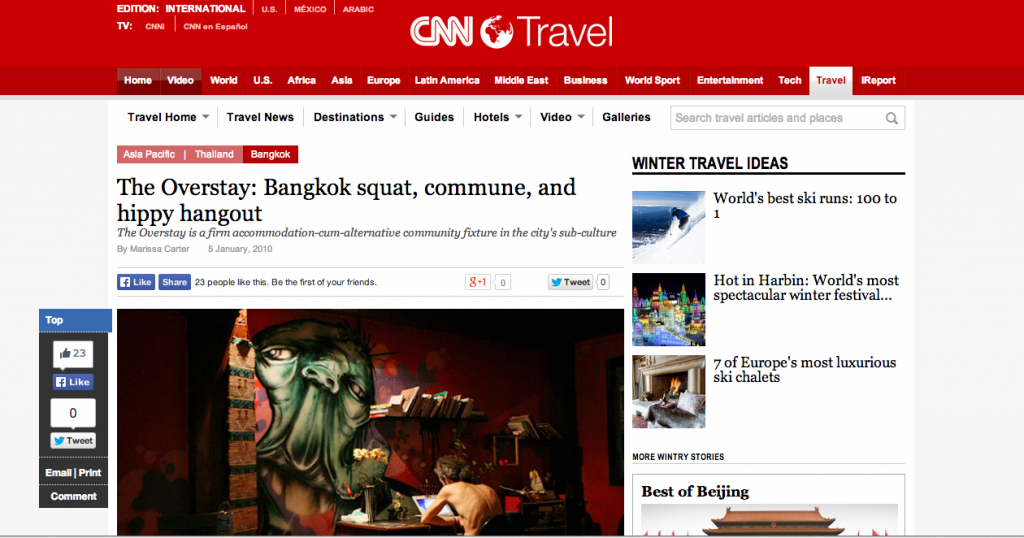 Travel CNN: “Travellers arriving in Bangkok to look for hippy, gritty, or just plain alternative fun might be a bit disillusioned by Khao San road’s efficiently commercialised million baht strip. But for those brave enough to venture past the usual backpacking bubble, The Overstay Bangkok is a one-stop shop for the city’s unconventional crew –- whether resident or just passing through.”

Bens Beds: “A combination hostel, music venue, and neighbourhood bar for local foreigners, I often found myself here on random nights for a beer during my time English teaching. In the process, I would be met by locals and regulars as well as a constant rotating crowd of travellers who were coming and going from all parts.  Chatting with them was a nice way to live a little vicariously when I was not able to leave the city.”

Unravelled Travels: “You can find The Overstay in Pinkao, a safe distance from the garish backpacker prison of Khao San Road (which does has its plus points, but like fuck am I staying there). As far as I’m aware, there is nothing for the average backpacker experience around here, and therefore very few English speakers. As such, The Overstay – for those who don’t do their research – attracts mainly because of its cheapness. Therefore, it is the recipient of mixed reviews. The negative ones are, I think, mainly from individuals who have been lured by the low price, and repelled by its apparently ramshackle nature. If you crave designed, formulaic comfort, I’d recommend you snuffle for your truffles elsewhere. On the other hand, if you seek a challenge, something beyond the passive consumer culture so many hostels enforce, The Overstay may be for you” 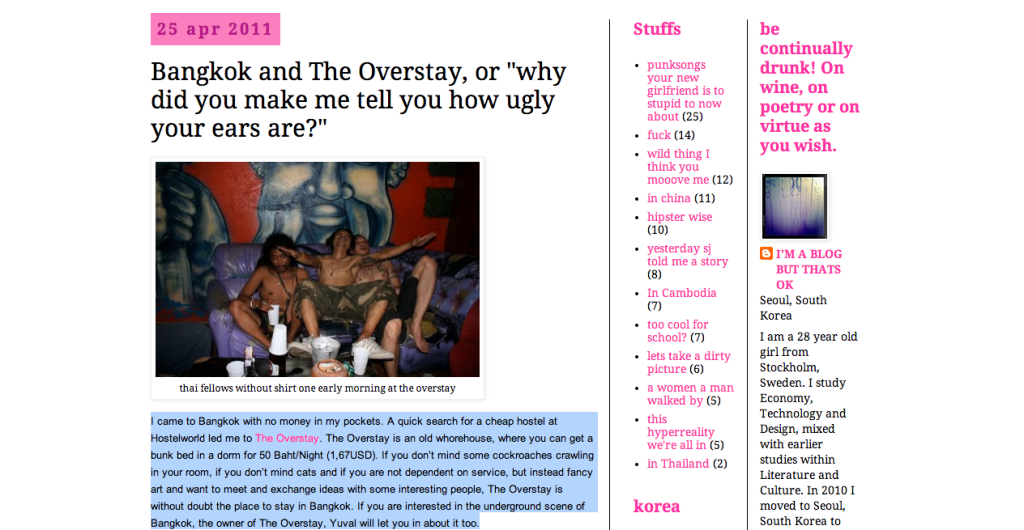 I’m a Blog But That’s OK: “I came to Bangkok with no money in my pockets. A quick search for a cheap hostel at Hostelworld led me to The Overstay. The Overstay is an old whorehouse, where you can get a bunk bed in a dorm for 50 Baht/Night (1,67USD). If you don’t mind some cockroaches crawling in your room, if you don’t mind cats and if you are not dependent on service, but instead fancy art and want to meet and exchange ideas with some interesting people, The Overstay is without doubt the place to stay in Bangkok. If you are interested in the underground scene of Bangkok, the owner of The Overstay, Yuval will let you in about it too.”

Links to some Overstay friends:

Wander Wolf Wolf in a talented young photographer with amazing photos from all over the world. This is his project the wonder wolf

Utopix is a French collective of writers and urban artist. They contributed (Vincent) to make the overstay an interesting place. They do a lot of work with children (from western and poor countries), introducing them to art and creating a fusion of influences. 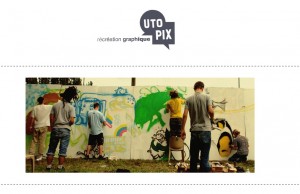